It seems that independent developers have a knack for taking gameplay features from different genres we love and melding them together to create a very enjoyable gaming experience. That’s exactly what the team at Fire Hose Games has done with Slam Bolt Scrappers. They’ve combined a brawler with a puzzler to bring gamers a very unique game that makes Tetris look like a game of Keno. The combination seems strange, but it works really well, especially in multiplayer. The four-player action is a blast, but the exclusion of online play is incredibly disappointing and really hurts the replay value.

Slam Bolt Scrappers is a game that you have to play in order to get a real understanding for its gameplay. The easiest way to explain is think of Tetris, but in order to get the blocks, you have to kill enemies that are flying around the map, and instead of trying to get rid of pieces, you are trying to build squares: I call it the anti-Tetris game. You’re objective is to build squares using like-colors and the squares will turn into weapons that attack the enemies tower; the bigger the square the bigger the attack. While that might seem simple it’s anything but.

After unlocking all the levels and all the weapons, Slam Bolt Scrappers becomes a very strategic game. Not only do you have to concentrate on building blocks to make weapons, you have fight the creatures who give you the pieces and who are also dropping bombs on your blocks, and you have to fight your opponent who can do damage to you as well. Knowing when to fight and which blocks to build where is the key. The brawler aspect of the game fits surprisingly well in a puzzler. While most puzzlers like this have you concentrating on simply matching blocks or colors, by adding the brawling aspect to the game Fire Hose Games has taken the original puzzler formula and added a whole new competitive dimension to it.

However, this can be a bit overwhelming for those who aren’t used to concentrating on so many things at once. When you have weapons constantly flying across the screen, hitting the towers while at the same time you have enemies trying to fight you and destroy your tower, you can really get lost in the mix. The way the blocks are positioned behind you can also be hard to see, especially in multiplayer. Adding to the chaos are stages that have level-specific hazards like an ice level that will drop ice blocks on your tower to disrupt your block building. and a level where you have to balance two towers; if one tower is heavier than the other, that tower will slowly sink into the lava. You really have a lot to think about during a match which makes the gameplay that much better. To some, though, it’s just overwhelming. 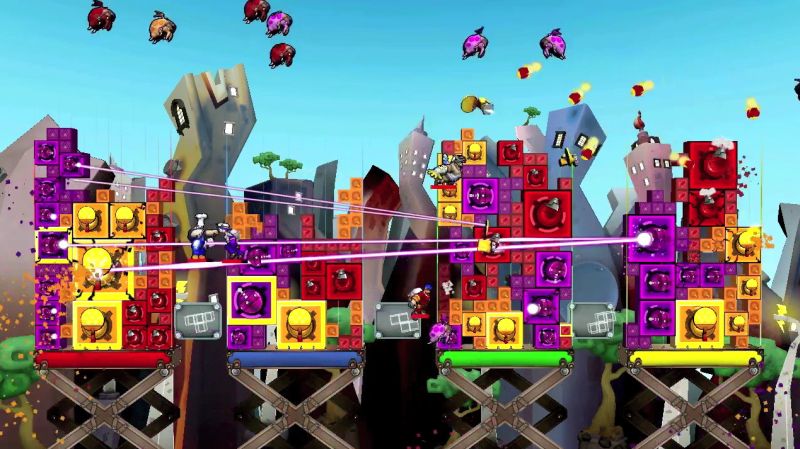 Luckily you can play four-player, single-player co-op or multiplayer battle modes to help control the chaos. The single player is pretty short; depending on what difficulty you choose and whether or not you are playing co-op, you can finish the campaign in a few hours. There’s a nice mix of boss battles and it’s really fun while it lasts. On harder difficulties the CPU gets really tough. So far I’ve only beat the CPU on hard, on expert it’s seems nearly impossible. The AI is just so fast at building blocks, and it seems to hit much harder. In Battle mode, the four-player action is by far the best part of the game. There’s nothing like getting a group of people together for some 2v2 or free-for-all battles. In Battle mode, you’ll have the freedom to pick and choose which weapon types you want to include and which map you want to play on. From my experience. the less weapons you have the better the fight. Some matches turn into a brawler, where you simply fight each other, but others turn into more of a strategic game. In 2v2, having one person fight the other players while your teammate builds blocks is a good strategy as long as you’re good at fighting.

While the multiplayer is great, I found some issues with it. When playing free for all, the screen is just too far away from the action, so it’s hard to see what’s going on, especially when you are trying to place the perfect block. This is an issue in most modes, and I wish there was an option to zoom it or maybe make the characters bigger along with the blocks. I could also use an option to pick which Ninjas show up in the match. These enemies attack you, but also give power-ups that range from being able to physically do damage to your enemies tower to being able to steal a block. It would be nice to pick which ones appear, because some of them are, well, cheap. All of these issues are really small compared to the lack of online play. It’s kind of understandable that with so much going on at the same time it might be tough to take this title online, not to mention it’s made by an independent developer, but with online play I really think Slam Bolt Scrappers could have been that much better. It’s simply disappointing that such an exciting game is confined to offline multiplayer only. 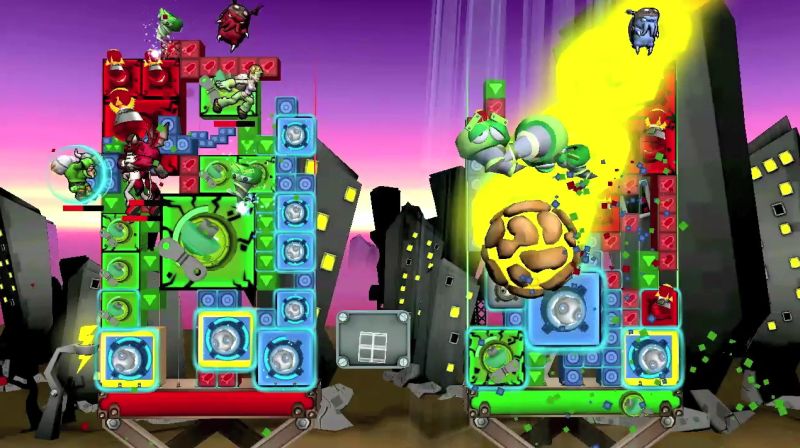 In the end, Slam Bolt Scrappers is a fun game. It’s very unique, and successfully combines the brawler and puzzler genres. The graphics are clean, the game runs smooth with only a few framerate drops here and there, and the music fits with the gameplay. Even though the single player is short, I’ve found myself having just as much fun playing Battle matches against the CPU. There’s enough diversity with the levels and weapons to keep the game fresh, though a challenge mode would have been a great addition. The lack of online play is disappointing and hurts the replay value, but that’s not a reason to overlook this title. Fire Hose Games has created an exciting title that has ruined Tetris for me; I’m not sure how I can ever go back to that game after playing Slam Bolt Scrappers, and considering how much of a classic Tetris is, that’s saying a lot.