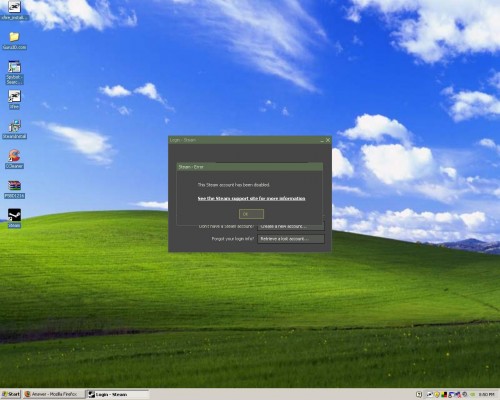 It would appear that if you make a post somewhere online in regards to even the thought of selling your Steam account, you run a high chance of having your account banned. Not to mention that you will lose access to any and all games in your Steam library. One user learned this the hard way.

A month ago, the user in question had posted on Reddit.com that they were wanting to see how much someone would be willing to pay for an account with games worth $1,794.52. On Reddit, they wrote:

“Obviously I don’t want someone to pay $1,800 for my account. I’m looking at money of course, not full price considering I bought most of them on sale, but maybe we can come to some sort of deal…Of course if someone actually takes me up I’ll be removing my credit card information from the account, along with my friends list.”

A week ago, the same user became unable to access their Steam account. It was only later that they find out that the account was disabled due to a violation in the Steam Subscriber Agreement. The agreement specifically states that “you may not sell or charge others for the right to use your account, or otherwise transfer your account.” And it seems that a Steam Support member told the user that the account was permanently banned.

Once again on Reddit, the user posted their irritation at the banning of the account as it was not sold or traded, and also bemoaned the lack of warning. They claim that they were only asking how much one would pay for an account like that. But when you read another post made by them, one has to wonder if the intent to sell was there:

“I WAS ‘trying’ to sell my Steam account on r/gameswap, but that was over a month ago, you can’t even access the post now. What pisses me off is that they waited an entire month, up to last night, before disabling my account. They didn’t even send me an email [explaining] why it was disabled, I was just logged off of Steam with no warning.”

It should be noted that Valve posted on their official forum that the account has since been reinstated.

The Evolution of Gaming Consoles and How They Shape the Genres