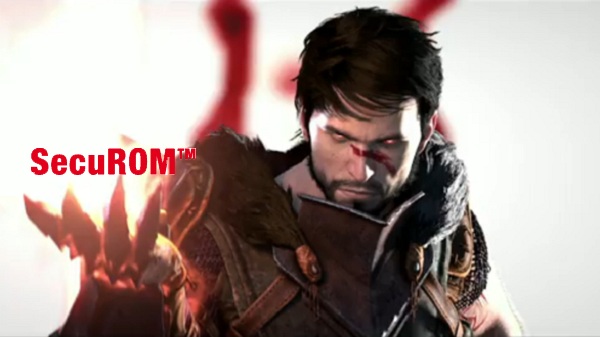 Last week caused quite a stir in regards to EA/Bioware’s recent release of Dragon Age II.  Whether it was disappointed fans arguing over the quality of the game itself, or controversy over forum/game-banning and SecuROM in the disc-based version of the game, there was plenty to discuss.

Some of you who may not have heard of Reclaim Your Game until last week, especially when their servers became overloaded and the site went down, were skeptical.  Did they really test the retail version (since it was well known the pre-release press copies would have SecuROM)?  Did they really test the game thoroughly, or were they simply trying to slander EA/Bioware?  Lisa Pham, CEO of Reclaim Your Game and SecuROM specialist, responded to these questions, clarifying their testing process.  EA/Bioware also reached out to them regarding the situation, and issued a public notice, which you can read here.

For example, as to the testing procedure for Dragon Age II, this was Lisa Pham’s clarification on the issue (posted in the comments to our original SecuROM article):

“What we (RYG) reported is exactly what we found using the Retail Disc Version of Dragon Age 2. Normally we use very protected PC’s for our evaluations, but this time I went the one step further and did it on my personal gaming machine to act as any other consumer out there with only the regular type of things/programs on it. I installed the game/launched it and let it do the check for the date, which is where the SecuROM part comes into it (which isn’t the biggest issue). Then proceeded to play it. Once finished I turned it off and went to see if SecuROM was anywhere in my registry (due to seeing SecuROM on the date checker pop-up screen)… the SecuROM folder was in there 🙁 … I then went to look in the Temp folder and it was in there too… which is exactly as stated on the SonyDADC/SecuROM website says they are there. BUT what they fail to tell you is that they DON’T automatically remove themselves, because what they state is that they will delete/remove themselves, one when the checker has passed the check at the first game launch and the others in the temp area will go with a reboot. Neither of which actually happened. And to prove it further, I actually downloaded the official SecuROM removal tool and launched it…. it then FOUND the SecuROM folder in my registry, so I used the tool to remove it. The folder (with SecuROM files inside) in my temp, I just manually deleted myself.”

She does admit that the discovery was so upsetting, she didn’t test to see if the game would load without SecuROM, or if it would try to re-install (or re-date check).  However, I can tell you about my own personal findings on the matter. 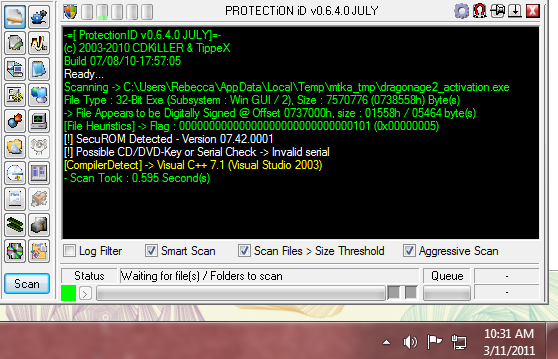 I installed the retail copy of the Signature Edition of Dragon Age II on my computer on launch day.  This was not a press copy, and this was the disc version, not the Steam version.  After reading RYG’s story two days later, I did my own investigations and did find evidence of SecuROM in both my computer folders/files and in my registry (this was done both manually and with various SecuROM discovery tools).  Once the presence of SecuROM was confirmed, I used a removal tool to remove it from my computer, although I had to manually delete some of the files.  After doing so, I tested the game to see if it would run, which it seemed to do fine (including connecting to EA’s servers).  I also checked to see if the files had been reinstalled, and it seems as if they haven’t (and I wasn’t prompted again for a date check).

So, from what I can tell, SecuROM was used for a release-date check.  However, these files would have remained on my computer seemingly indefinitely, had I not removed them with a SecuROM removal tool and deleted them manually, which contradicts what EA and Bioware had stated before release.

“What made this one (and Dead Space 2) different, is that EA or EA/Bioware DIDN’T inform their consumers that a **Sony DADC/SecuROM product** WAS actually used in DA2. It has the name of SecuROM… it connects to the SecuROM servers, it’s is stamped with SecuROM, it is MADE by SecuROM… so it IS SecuROM, even if it’s a fairly harmless version, a simple date checker or a full blown Nasty piece of work, it’s STILL SecuROM, no matter what you want to call it. So, EA/Bioware AVOIDED telling the whole truth and DIDN’T inform their consumers before they purchased it… it was NOT on the BOX, it was NOT on the Website and it WAS NOT in the EULA. Something which EA was instructed to do by the courts. If this is not enough proof for you or anyone else, then I don’t know what is.”

The good news about this, is unlike some other SecuROM-loaded games, it appears as if the game can run fine (after you complete the date check) if you remove all traces of SecuROM from your machine.  The problem is, you shouldn’t have to do that, especially since you were never notified that SecuROM would be installed in the first place.

I know some people find it hard to believe what the big deal with all this is, and I don’t think I can convince you if you aren’t already.  But it is a big deal for me, and others like me, and I feel we shouldn’t take things like this lying down.  The good news is it seems those who have voiced their opinions on this issue have been heard, and RYG should have an update from Bioware (which we will be sure to post as soon as we receive it), shortly.

Correction notice: I would also like to point out an error in our original article: EA settled the suits against them in the original SecuROM cases (I had stated that they had “lost”).  Still, part of their settlement agreement was to fully disclose SecuROM, which they did not do in the cases of both Dead Space 2 and Dragon Age II.  (Thanks, Alex mcQuown.)

Adventure Time: Explore the Dungeon Because I DON’T KNOW!! Review