Battleheart has an undeniable charm about it.  While the game literally has no story, you guide four characters (out of a dozen) through various stages until a final showdown with the face of evil in this mobile action RPG.  Simple in style yet surprisingly deeper then one would expect, Battleheart had me draining my iPhone battery consistently.  The style of the game may remind you of Behemoth’s Castle Crashers, but unlike that sidescrolling brawler, this is strictly a single-player affair.  Thankfully, the lack of multiplayer takes nothing away from the game and overall experience.  Aside from the instantly likeable sprites, the game has surprising amounts of detail to abilities and animations.  I was amazed at the variety of enemies and different powers each party member possessed, and enjoyed level grinding just to unlock new ones.

The characters are also another area in which Battleheart excels, in that it incorporates its RPG elements very smoothly.  Each character starts at a low level, but every four to five levels gained, they are granted a new ability.  Some may be passive, while others are activated by pushing the character and an icon appearing in the upper-left corner of the screen.  Finding party members that compliment each other is a very rewarding experience, and I found myself needing to switch out my knight because he didn’t mesh well with other characters’ playstyles. 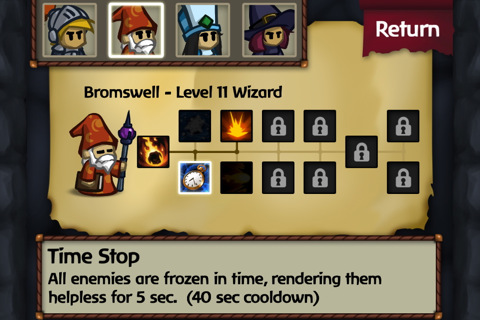 This isn’t to say that there aren’t issues with the game, but they are more irritating then problematic.  One nuisance I found is the imprecise way to control each character and their powers.  You must first tap a character to bring up their powers and sometimes you must direct powers (especially projectiles) towards specific enemies.  I often found myself controlling the wrong character or healing the wrong person due to a lack of accuracy.  However, this didn’t occur frequently and I didn’t feel like it took too much away from my overall experience, but felt the need to address it.  Perhaps they’ll release a patch with an alternate control scheme for those with big fingers?

What more could you really want from an iOS title?  Great graphics, a decent variety of characters and enemies, and a great system incorporating RPG elements.  Even after beating the final boss, players are welcomed to test new characters out and continue searching for better weapons and gear.  While the game isn’t perfect, most issues are minor at best and can be easily remedied in a future update.