Back to the Future is back with TellTale’s continuation of the series in their classic point-and-click form.  Picking up where the series left off (a few months after the events of Back to the Future III, to be precise), players take control of Marty, desperate to prevent the contents of Doc’s lab from being auctioned off, and who soon discovers his friend is trapped in the past, with Marty the only one able to rescue him.  After a brief intro in the present (of 1987), you accompany Marty back to prohibition-era Hill Valley, where you meet characters both familiar and new.

Initially, my biggest issue with the game is that it literally picks up three months or so after the last film ended, with no introduction, no recap, nothing.  So, if you’re like me, and it’s been a while since you’ve seen the films (or worse, you’ve never seen them all), it’ll take a while to get your bearings, and I think this really hurts the game.  Instead of jumping right in and enjoying yourself, you’re trying to rack your brain to remember what happened in the previous films, or struggling to find a summary online if you haven’t seen them all.  I really think TellTale should have thrown in a quick “previously on” or something like that at the beginning to refresh memories and introduce you to the situation.  I know this game is for the fans, but I still think it is a disappointing oversight.

Putting the lack of setting aside, the game is definitely something fans of the series will enjoy, as details are well attended to, from the design of Doc’s lab to the Deloreon itself.  The voice acting (as is typical for TellTale) is also top-notch, with Christopher Lloyd reprising his role as Doc, and an excellent sound-alike filling in for Micheal J. Fox’s Marty.  The game also borrows heavily from the soundtrack of the films, so in many ways it looks and sounds like the films (albeit in TellTale’s characteristic cartoony style).  In these senses, the game does feel like you’re accompanying Marty and Doc on another adventure through time. 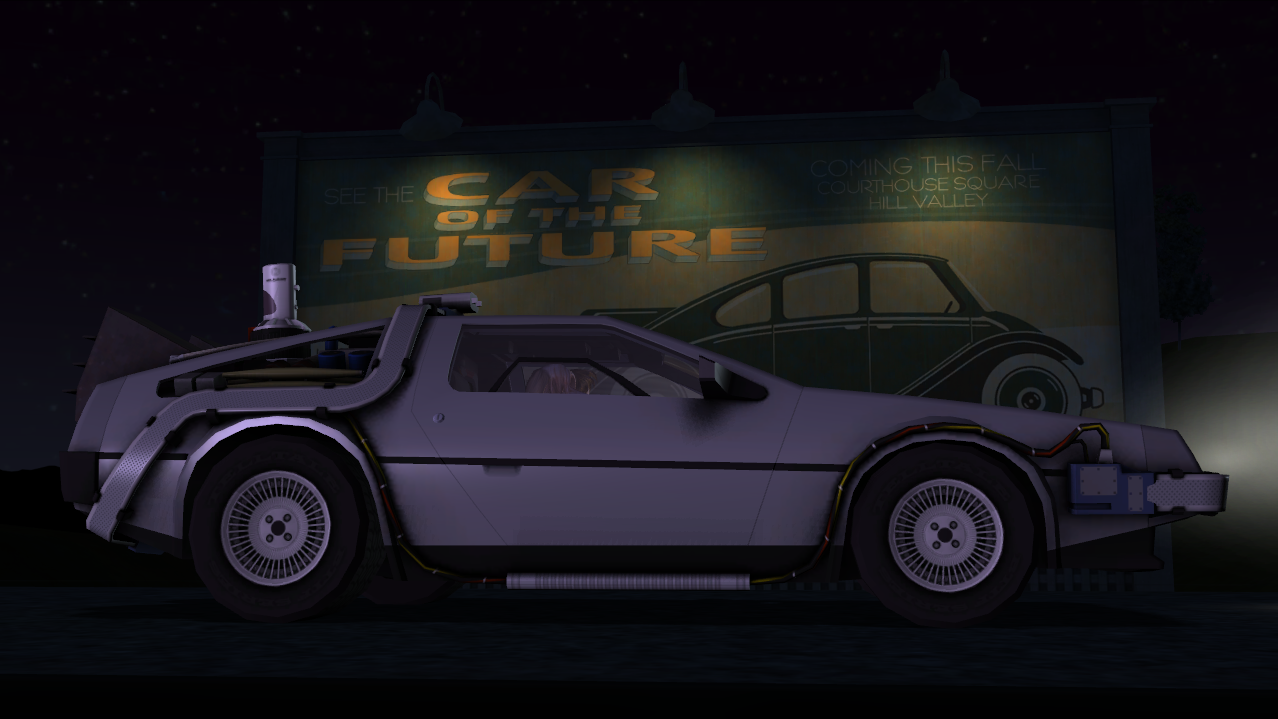 As far as the interface and puzzles go, TellTale has done things a little differently this time around, as veterans will quickly notice.  It will become apparent very quickly that this series was designed for fans of the series who aren’t necessarily gamers, in fact, it felt as if they were doing their best to ensure that even people who may never have played a game before–ever–will be able to figure out how to guide Marty around and make their way through this first episode.  This isn’t necessarily a bad thing; I honestly think the more the merrier, and what better way to get people gaming than with a familiar franchise?  For example, besides the tutorials, the game introduces a much more direct and concrete hint system from previous TellTale installments.  Whereas the other games would simply give you hints via the character’s dialogue, Back to the Future has a bonefide hint section in the menu.  Sort of like the Professor Layton Games, you can click for several levels of hints if you’re stuck on a puzzle or what to do next.  Testing these out, I found the first clue to be more than obvious enough, but I don’t have a problem with a system like this, because it is there if you need it, but you don’t have to bother with if you want to go it alone.  Another change veterans will notice is the simplification of the inventory system: while you can use objects on people, you can’t combine them, so everything is straightforward; you just need to figure out what item to use on whom, and that’s it.

All these tweaks definitely make the game easier for newcomers, but it almost feels like TellTale may have gone a bit too far.  For one thing, the UI is enormous, taking up most of the screen, forcing the subtitles into the middle – it just looks bad and ruins the feel of the game, at least in my opinion.  But that is a relatively minor complaint.  My biggest gripe is that in making the game accessible, TellTale has almost entirely sucked out the fun or challenge out of the game’s puzzles.  Before you complain, let me explain.

I honestly have no problem with a game that is low in challenge.  In fact, sometimes I rather enjoy them.  It can be nice to just sit back, relax, and enjoy a game, without any stress or worries.  I really don’t think a game needs to be difficult or challenging to be enjoyable or successful as a game.  I know many disagree with me on this point, but I will argue that the right game can be a blast, even if you don’t die every ten seconds or have to resort to a walkthrough to help you with the puzzles.  For example, I wouldn’t really consider a game like Heavy Rain to be challenging; it may test the limits of your ability to craft your fingers into spider-like contortions, but in general the game is more about moving through the story than anything else.  It still has tension, but I wouldn’t call it challenging in the same way that many other games may be labeled as such.  The problem, in my opinion, with this first episode of Back to the Future is that while it lacks challenge, it doesn’t have much to make up for it.  My argument is that you have to have challenge, or you have to have a compelling story and/or gameplay experience that drives you through the game.  If you don’t have any of these, then you might have some great visuals or great voice work, but you don’t really have a terribly fun experience. What I mean is, ask yourself a question, assuming you’ve seen at least one of the films: what made them so much fun?  The settings, right?  Being able to go back to the 1950s, or to the future, or back to the days of the wild west – they were exciting.  This new game series sends you back to the Prohibition Era – sounds great, right?  Maybe I’ve been spoiled by the phenomenal series Boardwalk Empire, but TellTale’s vision of the 1930s seemed, well, dull.  And the puzzles were so dumbed down, they really weren’t puzzles, and the style of the game really left any dramatic tension falling flat.  While the ability to explore (typical of  the point-and-click genre) definitely fits the Back to the Future series, I felt like its limitations really held it back.  Perhaps my recent extensive playthroughs and trophy-hunting in Heavy Rain has tainted me, but I honestly feel like the game would have worked better in more of a hybrid point-and-click style ala Heavy Rain or the upcoming Jurassic Park game TellTale has in the works.

I know it may seem like I have nothing good to say about this episode, and I’m sorry.  I’ll honestly say I didn’t enjoy it.  I didn’t find it fun, I found it boring and disappointing, especially since I know TellTale can do so much better.  However, I also know that first episodes aren’t always TellTale’s strong point, so I’m willing to give them another chance.  Perhaps hardcore fans of the series will be able to overlook the flaws more than I could, but as of right now, I found It’s About Time more disappointing than enjoyable.