The 3DS made a major comeback in the latter part of 2011 thanks to a price drop and a steady flow of exclusive games. Pushmo, a unique, block-pushing puzzle game, is one such exclusive title, and potentially one of most fun puzzlers available on the 3DS e-shop. The game follows the progress of Mallo, who appears to be some bizarre (but charming) cross between a cat, a sumo wrestler, and a marshmallow. Mallo is on a quest to save the children of Pushmo Park, who have all been trapped inside the colorful block structures they play on, otherwise known as “pushmo.” The player’s job is to guide Mallo through the puzzles and thwart the doings of the naughty trickster responsible for ruining the children’s fun.

In order to rescue the children, the player must pull and arrange blocks until they become climbable. Blocks can be moved up to three spaces forward, either by grabbing them from the front or the side. Mallo can then scale the block via vertical or diagonal jumps. Sure, it sounds easy, but the levels become increasingly daunting. Later levels introduce manholes, which allow the player to warp from one place to another, and buttons, which will move a block three spaces forward when stepped on. Papa Blox, an elderly Pushmo Park resident, arrives to instruct the player whenever a new ability is learned. His explanations are a bit long-winded, and sometimes unnecessary, but fortunately his appearances are few. Those who do not have the patience for time-consuming tutorials can rest easy. The gameplay was mildly reminiscent of the climbing segments in Catherine, Atlus’ risqué horror/puzzle hybrid (and it is important to note here that Pushmo is about as risqué as box of Legos), but Pushmo carries a pacing more like recent casual games.  A single pushmo  usually takes between three to eight minutes to solve, but depending on the difficulty, can take up to 20. The difficulty curve moves on a moderate incline throughout the course of the campaigns mode, but there will sometimes be a puzzle that seems unsolvable hidden among a batch of simple Pushmo  — in that case, the player has the option to skip and continue to the next level.

The graphics, while simple, are aesthetically pleasing and work great with the 3D visuals. The geometric shapes easily show off the depth of the system’s 3D display capabilities, and color coded layers make Mallo’s climbing environment easily discernible. A single pushmo can be organized from up to ten different block colors. Naturally, the cube-shaped pushmo pieces lend themselves to some interesting and intricate pixel art.

Pushmo Studio can be unlocked after completing all of PaPa Blox’s tutorial puzzles, which allows users the create and share their own Pushmo puzzles. The interface for puzzle creation includes a grid and several color palettes, allowing users to easily recreate their favorite game sprites in pushmo form. Creating a complex, solvable pushmo can prove to be a difficult task, however. Pushmo Studio allows players to share their creations by encapsulating them into scannable AR codes. To open another user’s puzzle, the player simply has to enter the 3DS camera to snap a picture of the code. There is no option to share puzzles via StreetPass or SpotPass. As the player levels up in the main game, more customization options become available in Pushmo Studio. 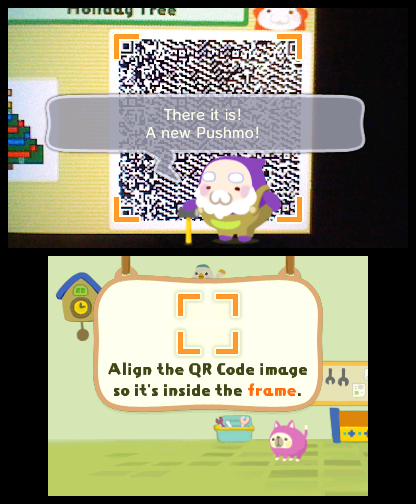 The unique gameplay of Pushmo is exemplary of what casual puzzle games should strive to achieve, rather than recycling the themes used by Angry Birds and Jewel Quest.  While relatively simple in concept, Pushmo proves to be original and fun. The game seems perfectly home on the 3DS system, and offering hours of unique gameplay, is  a worthy exclusive. While Pushmo alone may not be a reason to run out and buy the system, it certainly speaks for the integrity of Nintendo’s e-Shop on the 3DS  — a feature that was comparably lacking on the Wii and the Nintendo DSi.