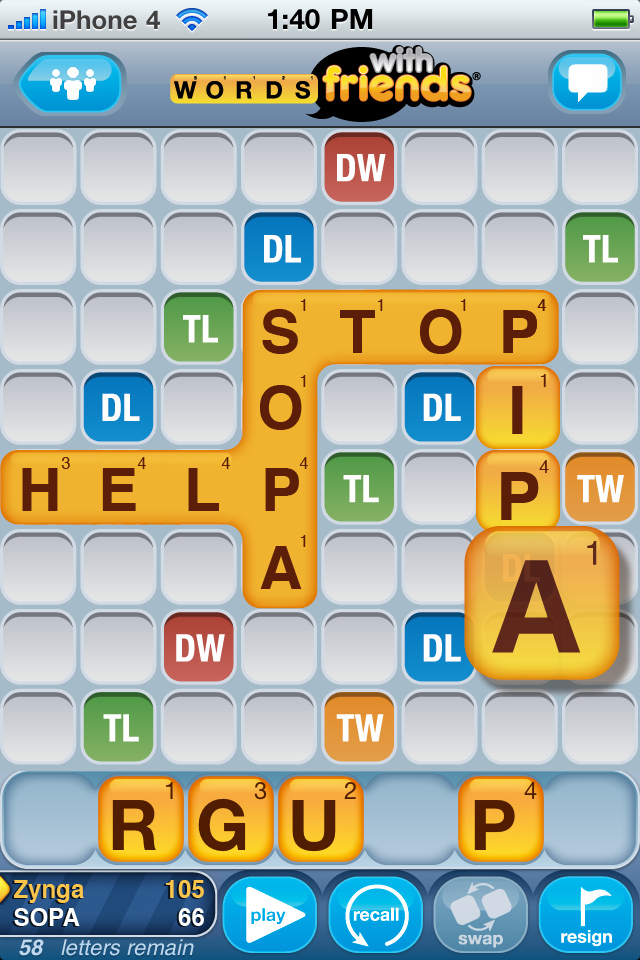 Gaming giant Zynga has openly voiced it’s concerns with SOPA in the past but today they’re expressing their discontent in a more creative way.  In Zynga’s blog, the company is quoted as saying:

While we support the goal of stopping foreign web sites from engaging in copyright infringement, we believe there are more effective and targeted ways to deal with these problems without censoring the Internet. The overly broad provisions we’ve seen in the pending SOPA and PIPA bills could be used to target legitimate US sites and freeze innovation at a time when it is needed most.

We have equal concerns that certain proposals would tamper with the technical architecture of the Internet through manipulation of the Domain Name System (DNS), a foundation of Internet security.

We commend President Obama for joining us and thousands of companies in taking a clear stand on these important issues.

We also trust the White House will keep its promise to “continue to work with Congress on a bipartisan basis on legislation that provides new tools needed in the global fight against piracy and counterfeiting, while vigorously defending an open Internet based on the values of free expression, privacy, security and innovation.

Zynga has asked it’s fans to help in the fight against SOPA by going to StopTheWall.us and connecting with your senators.  They’re encouraging their users to have a point of view on these important issues that affect all of us and to urge their Congressional representatives to preserve a free and secure Internet and oppose SOPA and PIPA.